Dance With Feeling
“What is a dance? At one level, it is the dance position, the steps, the timing, the coordination, and the athletic strength to accomplish the steps.

Are you able to do a forward, lock, forward; or another combination of forward and locking steps; or even running forward locks in quickstep — without tripping?
Can you assume banjo position — not the side-by-side, hip-to-hip variety, but hips together in a closed position and only turned a little left so that you can step outside partner, upper bodies not square to line, but sliced, angled, man line and wall? Can you accomplish that little bit of contortion comfortably?
Dance is these things, but it is also your feelings about those steps, about the music, and about your partner. 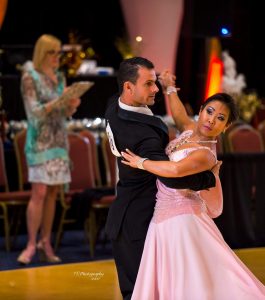 As you move through a particularly sweet music passage are you walking or do you soar?
When you cuddle, do you just assume the position or do you show some cuddly feeling?
Is your caress perfunctory or does it linger just a little and include some eye-contact?
Is your arm work half hearted? A drooping arm projects a different feeling than one that rises and extends, even through the palm and fingers. Do you look and feel low and droopy or up and glad?
A dance is a physical performance, getting the movements right, but it is also communication of feeling and emotion and an interaction with your partner, even a celebration. A great athletic performance can be robotic, rote, and mechanical, the moves correct but cold. Or it can be human and emotional, not necessarily big and melodramatic, but real — movements not for their own sakes but with feeling behind them.

At the end of a dance, the cue is “apart, point.” Do you step back, settle, and collapse? “Whew, that’s over.” Do you look around, wondering what’s next? Or do you ease reluctantly apart from your delightful partner, poignantly release fingertips and truly point — something — in acknowledgement? Point your toe, your finger, your gaze — to say, “thanks, that was great.” 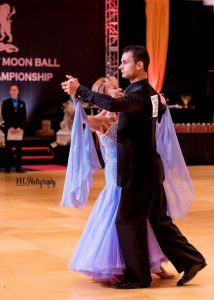 Foxtrot and ChaCha are light flirtation.
Rumba is more earthy seduction.
Jive and Quickstep are play.
Samba is the Rio Carnival.
Waltz is a 19th century formal ballroom and Jane Austin.
Dance is a partnership between two individuals, not a performance by separate individuals. It is built on indication and response, trust and cooperation, and surrender. It is a display of a relationship between two people.

Switching Grapevine
We could probably pick any figure and think about ways in which we could dance it less mechanically and separately, and more emotionally and together, but let’s look at a newish and not so common one — the Switching Grapevine.

We are not in closed position. We are not even facing each other, but at least we are holding hands. How else can we add to the expressiveness of the figure? We are moving pretty fast down line. The steps are all quicks, but let’s not make it a furious rush. We can stay close instead of at arms’ reach and keep our steps compact — flowing together instead of one dragging the other along. We can think about where we are looking and where we are focusing or aiming our bodies. It seems that the pursuer should be angled a little toward and looking at the one being chased. The pursued might look back to urge the pursuer on, or she might play a coyer, more flirtatious role. But do something. Don’t just plod along.

You might think that the one doing the rolling across is the one doing most of the work during that measure, and so the other might be tempted to take it easy until it is his turn, but both need to dance during every measure. While one does the roll, the other dances a “cross, recover, side, recover.” Don’t just dance in place, and certainly don’t just stand there like a lump. The initial crossing step especially has feeling to it. You cross in front and so draw on your partner, pulling him or her toward you. It’s an expressive gesture, a part of the flirtation — “come to me, baby.” The second recovering step let’s your partner catch you. Then the final “side, recover” specifically allows her to float on past. We chase once more. Play that role: pull her to you and then let her go. Put that feeling into your hand-hold, into the elasticity of your connection, and into your expression and attention.

It is easy to become emotionally distant from your partner. You’ve been dancing for years, thousands of dances. So, here she is again, posing, stretching, and lifting into a great Develope, and you are just standing there, waiting for your next step. Or you might be standing tall, chest swelled, as the matador in a paso doble, and she is focusing not on you but on her own movements and footwork. But, dancing together, you can go beyond the physical performance and reinforce and complement each other. Your dance can be more than the sum of its parts, or it can be only those parts. Any dance can include attitude, mood, emotion, feeling … Without these, it is just steps.”
by Harold & Meredith Sears 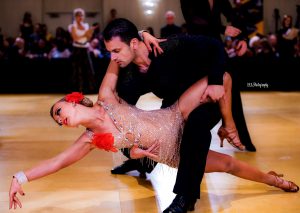 A version of this article was originally published in the Dixie Round Dance Council (DRDC) newsletter, November 2010; reprinted CRDA Round Notes, March/April 2015.