Most diet guidelines tell us to watch out for salt—the U.S. government recommends that healthy adults consume no more than 2,300 milligrams of sodium per day, or the amount in just one teaspoon of table salt. The American Heart Association’s recommendation is even lower: 1,500 milligrams per day. 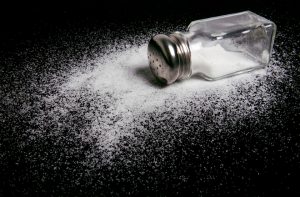 Excess sodium can cause high blood pressure and increase the risk of stroke and heart failure. But when we sweat, we lose electrolytes. And sodium and chloride—the two components of table salt—are two of the electrolytes lost in the highest concentrations, according to the American Council on Exercise.

“Dancers need salt,” says Heidi Skolnik, a nutritionist who works with dancers at The Juilliard School and School of American Ballet. “The recommendation for a low-sodium diet is really not geared toward the active individual.” Sodium is vital during exercise because it helps regulate muscle function and the amount of water in the body. “I often recommend that athletes consume slightly more sodium than the average person due to their vigorous training and increased sweating,” adds Dr. Scott Weiss, a physical therapist and exercise physiologist.

Typically most dancers can get adequate sodium as long as they include some salty foods in their diet. However, “clean eating,” or diets that advocate eating mostly plant-based, unprocessed foods, are all the rage right now, and Skolnik warns that they can be too low in sodium. “If you crave salt,” she says, “absolutely add salt. You don’t need to avoid it.”

In extreme cases, losing too much sodium can lead to a condition called hyponatremia. “In essence, you begin to hold on to too much water—you’re diluting your own blood,” says Skolnik. Symptoms include nausea, confusion, headache, muscle cramps and fatigue. This condition is most common in endurance athletes, like marathon runners, who may drink large amounts of water without properly replenishing their electrolytes. But Weiss warns that long hours under hot stage lights can make dancers sweat more and increase their risk. Dancers’ perfectionism can also be dangerous. “They often have trouble finding true balance between their health and performance. Some compound excessive travel, exercise, performance and rehearsals, and simply do too much,” he says. If dancers don’t make time to eat and rest on long days, they put themselves at risk for hyponatremia.

Exact sodium requirements vary depending on genes and on how much you sweat. (And the fitter you are, the more you will sweat, as your body becomes more efficient at cooling itself.) If you’re concerned about not getting enough, or eating too much salt, a medical professional can check your electrolyte levels. Weiss also recommends consulting a dietitian to make sure you are getting all the nutrients you need, including sodium.

You may have heard that you should stay away from sports drinks because of high amounts of sugar and sodium. That is true for the casual exerciser, but sports drinks are designed to help highly active people like dancers replenish fluids, electrolytes and carbohydrates lost during exercise. If you are just dancing for an hour or two in class, says Heidi Skolnik, you probably don’t need more than water and a snack afterward. But the longer and harder your day, the more you can benefit from a sports drink’s extra boost.

If you’re afraid of eating too much salt, stock up on fruits and veggies that are rich in potassium. It counteracts the potential negative health effects of sodium by helping the body pass excess amounts out through the urine, and may also help blood vessel and muscle function. Top sources include potatoes, bananas, tomatoes, oranges and broccoli.